Hearing loss from noise can happen to anyone at any age, and it can take years to be noticeable. A 2017 study of U.S. adults aged 20 to 69 years shows that nearly one in four has signs of possible hearing loss from noise in one or both ears based on features of their hearing test results.

The research was conducted by the Centers for Disease Control and Prevention (CDC) with support from the National Institute on Deafness and Other Communication Disorders (NIDCD), part of the National Institutes of Health (NIH). CDC published the results in the February 7, 2017, issue of Vital Signs and in the February 10, 2017, issue of Morbidity and Mortality Weekly Report.

Noise is second only to aging as a leading cause of hearing loss. Young adults in their twenties can have signs of possible noise-induced hearing loss (NIHL). Using data from the 2011-2012 National Health and Nutrition Examination Survey (NHANES), a nationally representative survey, the researchers found that nearly one in five participants aged 20-29 had “noise notches” in one or both ears. A noise notch is a dip in the audiogram (a chart that shows how well a person can hear based on a standard hearing test) that indicates that a person has lost some ability to hear at certain high frequencies. 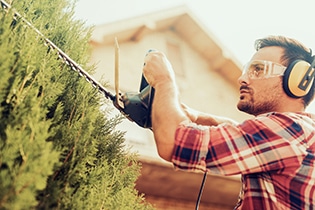 There is currently no gold standard or universal procedure to diagnose NIHL, so researchers use noise notches as a generally accepted indicator of possible NIHL. Some researchers believe that hearing loss in both ears is a stronger indication of NIHL than hearing loss in only one ear, but more research is needed. Many other factors, such as genetics, age, certain drugs, and infections, can also cause hearing loss, adding to the difficulty of determining the cause.

Overall, the report suggests that between 10 and 40 million U.S. adults under age 70 may have NIHL based on evidence of noise notches in their hearing test results. The estimate depends on whether one defines NIHL as notches in both ears or in one or both ears.

The report reinforces that noises all around us—at work, at home, and in the community—can lead to hearing loss if they are too loud for too long. People who reported exposure to loud or very loud noise at work were about twice as likely to have a noise notch in one or both ears as those who said they did not work at noisy jobs. One in five adults who did not report having a noisy workplace still had a noise notch in one or both ears.

Other researchers previously estimated NIHL among teenagers. An analysis of 2005-2006 NHANES data published in Pediatrics in January 2011 found that about 17 percent of U.S. youth aged 12 to 19 have features of their hearing test suggestive of NIHL in one or both ears.

Preventing NIHL is a priority for Speech and Hearing Associates. We encourage people of all ages to protect their hearing: