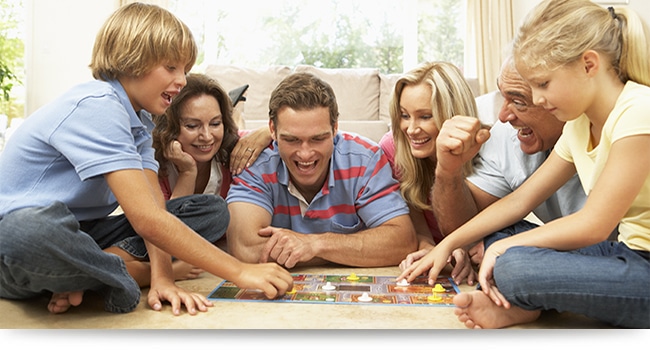 Board games are learning and laughter packaged in a box. Whether the game is one of chance or strategy; life lessons, critical thinking, deductive reasoning, and social skills come into play with a throw of the dice. Children can learn and enhance basic skills in the casual and friendly atmosphere of a game. This is especially important for children with an auditory processing disorder. Too often, therapy is computer based and the child is left alone to complete modules. Board games bring the human component back into the learning process and allow parents and siblings a chance to be an active participant in the therapeutic process.

Numerous studies have been undertaken into the benefits of board games. One such study by the organization Sharp as a Tack, looked at the benefits of after school board game programs in Illinois. They found that board games develop, enhance and strengthen cognitive abilities such as thinking skills, attention and focus skills, processing and sensory integration skills as well as memory and life skills.

Memory is the ability to recall previously learned information. Working memory focuses on information that is currently being worked on while short term and long term memory focus on information that was learned over a period of time. There are various board games that involve children remembering specific pictures, detail, clues or information. These games are found to enhance memory skills. The attention spans of young children can be strengthened by focusing on the game, as they need to remember the rules as well as when it’s their turn to participate.

Some games that strengthen memory are:

This refers to the speed at which the brain processes information. Processing speed affects the ability to complete tasks.

Specific games to focus on processing speed are:

Attention is concentrating on a single object or thought. Selective attention refers to the ability to remain on task when another action is present while divided attention is the ability to switch back and forth between two tasks quickly. Focusing on visual or auditory details is considered attention to detail.

These games work on improving memory:

Additionally, board games help build critical thinking skills such as problem solving, logical and deductive reasoning. Critical thinking teaches children how to think, not what to think.

Several studies have shown the benefit of board games to enhance literacy and numeracy skills.

A 2007 US study by Carnegie Mellon University found when children from low-income backgrounds played a game similar to Snakes and Ladders that performance on four kinds of numerical tasks was improved. Those gains were still evident nine weeks later.

Chess is a well- researched game. There have been numerous studies touting the academic benefits of chess playing. Studies have found that playing chess increases reading performance, math’s ability and IQ. In one study of students with learning disabilities, researchers assigned students to receive either 5 hours of math instruction each week OR 4 hours of math and 1 hour of chess instruction each week. The students were tested at the beginning of the school year and again at the end. The students who received chess lessons showed more improvement in basic math skills like counting and addition (Scholtz et al 2008).

Games such as Tetris, Blokus and Blokus 3D challenge students’ creative and spatial thinking skills as they manipulate geometric pieces (2D and 3D) across the board to block their opponent(s).

Monopoly helps to develop financial numeracy skills, which are often lacking in students today as most parents using debit or credit cards to pay for purchases. Other favorites such as Scrabble, Bingo, and Boggle also help develop literacy and numeracy skills. While games geared towards younger children, such as Qwirkle, UNO Moo Preschool and Zingo assist with colors, visual discrimination and categorizing skills.

Consider adding a family board game night to your week. It is a tradition that will help your child learn while making memories that will last a lifetime.

*This article was written by Melissa Karp and originally published on abouthealth.com. Speech and Hearing Associates is not endorsing any specific board game but rather providing examples of games that can be useful in developing cognitive abilities.